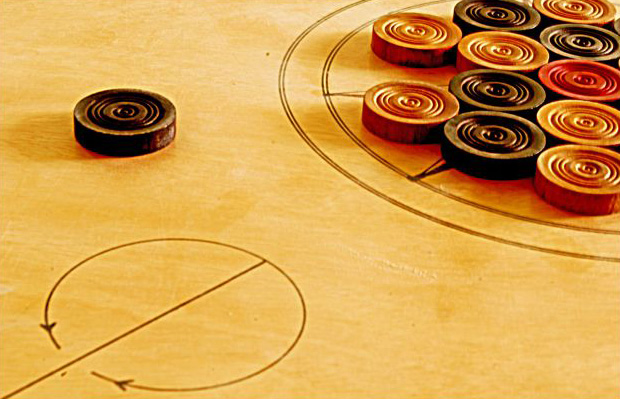 The game of carrom is believed to have originated from the Indian subcontinent. Although no concrete evidence is available, it is believed that carrom was invented by the Indian Maharajas. One Carrom Board with its surface made of glass is still available in one of the palaces in Patiala, India.It became very popular among the masses after World War I. State-level competitions were being held in different States of India during early part of the nineteenth century. Serious carrom tournaments may have begun in Sri Lanka in 1935 but by 1958, both India and Sri Lanka had formed official federations of carrom clubs, sponsoring tournaments and awarding prizes.

The International Carrom Federation(ICF) was formed in the year 1988 in Chennai, India. The formal rules for the Indian version of the game were published in 1988. In the same year the ICF officially codified the rules. The game has been very popular throughout South Asia, mainly in India, Pakistan, Bangladesh, Sri Lanka, and Nepal. It has gained some popularity in Europe and the United States where it has been introduced by the Indian diaspora. The United States Carrom Association reports on competitions in the U.S. and Canada and has a player ranking list as of the last tournament. The board and pieces can be bought in Europe or the U.S. and are usually imported from India. The most expensive boards are made to a high standard with high quality wood and decorations though cheaper boards are available.